A few weeks back, Aimee and I received this email below and we were speechless. Take a look at it and enjoy...

I am from Charlotte and used to go to Elevation and from that, I learned about Ferris and Wade's twin girls when they announced they had been born early and to keep them in our prayers. Through the blog Ferris kept about the girls, I found your blog about Kayleigh and I know you probably get a ton of people sharing how she impacted them, but I really believe she touched me the most as far as strangers go.

I was sixteen or seventeen when I first read through what was happening and I cried. At the time I think she was about to undergo her open heart surgery and I was in awe that doctors' would be capable of performing such a daunting task on such a tiny person. I have twin cousins that were born about 9 weeks early at about 5 pounds and 3 pounds and holding them for the first time was the most humbling experience of my life at the point in time. Thinking back to that and trying to imagine either of them undergoing any kind of surgery was amazingly impossible to wrap my mind around, but there Kayleigh was proving that she was strong enough for basically anything.

Anyway, I never thought about being a doctor or nurse because I was so passionate about dancing and photography and the arts, but reading your blog over those months changed me. I decided I didn't want to waste my education and life doing something for myself just because I was good at it. I decided I wanted to actually be there not just emotionally but physically for future Kayleighs'. I want to be there to fight for infants like her who weren't given a fair shot at life.

I just finished my freshman year at UNC Greensboro as a pre-nursing major. I haven't decided if I want to go to medical school after or continue with nursing and get my MSN. Either way, I know I will be a Neonatal nurse or Neonatologist and that is all thanks to your family, especially Kayleigh. She was simply amazing in the most innocent way. My mother and I always wanted to come to the hospital to meet you and your family but we felt as though we would be imposing on your precious time with her. I've always wanted to thank you for opening up your life to the world and sharing because without that, I would not be who I am and who I know I will be.

Tonight an old friend and I were catching up and he asked what I was in school for and what I wanted to be. Of course his first question was why because he knew me back in my art-absorbed days so I told him all about Kayleigh. After talking about it, I realized I hadn't been to the blog in at least a year maybe even two, which kind of makes me sad, so I revisited. I saw you are now living in Wilmington and immediately I knew I needed to finally thank you because I moved down here about two weeks ago for the summer. Small world! Thank you so much for letting me and so many others into your life. I am eternally grateful to you and your family.

So after reading this email, I contacted Aimee and Bo and we immediately put plans together to take Chloe out to dinner to catch up with her and see how things are going. It was a phenomenal dinner as we enjoyed some sushi and shared stories with each other. It was a blessing to meet someone like Chloe and to see how our little angel has touched yet another persons life so much.

Here is Aimee, Chloe and I. 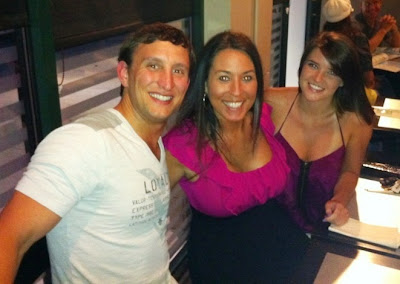 Thanks for sharing that awesome letter. Kayleigh's story touched so many lives, in so many amazing ways.

Kayleigh Anne is still touching hearts. You guys are so special. I continue to pray for you guys. Jan

Oh wow. This brought tears to my eyes. I just started following Kayleigh's story but I know she has touched and will continue to touch many lives.
I have a son, Judah, who was born premature and many mom friends of preemies. The one thing that I've learned about having a preemie: Once you have one, your life will never be the same! I think all children are a blessing from God but when you have such a miracle touch your lives like a preemie...It's truly amazing. I live in SC but my dad lives and works in Wilmington. It indeed is a small world but God truly knows how/when to place the most extraordinary people in your lives! =)
God bless you all!

Hi My name is Jenna and I came across your site. that is such an amazing and touching story about Chloe. UR little angel has touched so many people's lives, and even those who are strangers like Chloe was. Reading your angel's story has touched my life, and makes me thankfull that even though I am suffering with a life threatening illness, I am very thankfull that I am still here fighting, and reading her story makes me wanting to keep on fighting. My site: www.miraclechamp.webs.com

This is so awesome. Thanks for sharing your amazing story with the world.... Your daughter is a beautiful angel and has changed many lives with her courage and love... Thank you

That is just so amazing! Kayleigh has touched trillions of lives! Keep being strong Aimee and Adam! We all love you!

I lost a baby girl her name was faith and I know that even I was going through a hard time I new that there is always a reason for these things. So when I read this story I it touched my heart in every way that is possible. This is such an amazing story. Thank you for sharing this with everyone. =)

I believe this is God's way of letting one SUPER SPECIAL INDIVIDUAL that gets the "BIG PICTURE" of living a life of service!!! Chloe was "OPEN" to what God had for her LIFE. After experiencing the Freeman Family, she fell in LOVE with those other than herself!! Instead of seeking a career that SHE THOUGHT SHE WANTED, an ANGEL SENT TO THIS EARTH BY GOD influenced her to go into a completely different career path... Chloe, GOD BLESS SWEETIE, I'M GLAD YOU LISTED WITH YOUR HEART TO LITTLE KAYLEIGH!!!!! Now, all we have to do is to pray that others will open themselves up to do the same thing!!!!!!

This is such an amazing story and beautiful email. I came across the video of Kayleigh by accident and I am so thankful I did. My twin nieces were born premature @ 29 weeks weighing 2 & 3lbs, and it brought back so many memories of hospital visits and watching them struggle to get stronger every minute of the day. I'm so thankful that with many prayers from the friends and family around us they pulled through and will be turning a year old on the 15th of Feb.
I'm sure its the most difficult thing ever to lose a loved one yet alone a child.
Thank you for sharing this wonderful story of your daughter, she is a true blessing from God and i'm sure he has a special place right next to him up in heaven. May God continue to bless you and your family every minute of every day during this long process of healing.

Your story of your precious Kayleigh Anne has touched so many hearts over the past few years and still does to this day! What a touching story! It's amazing how God can work! Blessings to your family!

Today I was looking on YouTube and I seen this remarkable video and I thought I need to watch thiis and I looked and seen your website and I had a cousin have the same thing happen to her and she is heathly and I thought she is sooooo strong so is kayleigh. I am glad she is alive. You guys are amazing people and god has brought you a merical.