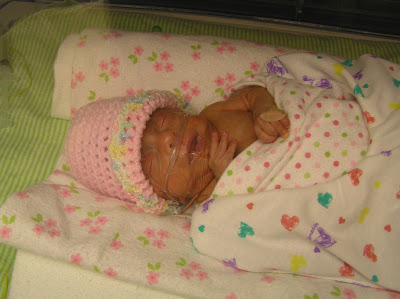 Well, after a very stressful day yesterday, today was looking much better, but only from the outside in. Sure Kayleigh is going to be feeling much better after being given a time release sedative, but the truth is no one knows why she is has been so irritated. All day today, she would wake up and clench her fists, turn red and whine all while breathing very fast as if she was hyperventilating. She would desat when she was awake and she would have apnea when she slept. The doctor came in to speak with us today and said that there could be many reasons why she is not happy or in pain. 1: The eye surgery and exam, 2: Stress from the Lower GI test, 3: Medicine to dialate her pupils, 4: No food, 5: Bloated stomach/trapped gas. No one can lay a finger on it and Kayleigh certainly can't tell us. So the doctors are going to keep an eye on her and see what is driving her crazy.

The doctor is also concerned about her lack of growth and wants to make sure it is nothing genetic. To be honest, I don't think anything is wrong genetically because it's probably the lack of food she has been given that is keeping her from growing. From the amniocentesis at the beginning of Aimee's pregnancy, Kayleigh was in the clear from any genetic disorders, but our doctor wants a physician to come in to check her out again.

Kayleigh's blood gases came back good today. She did get some blood because her hemoglobin was low and she started her feeds back late this afternoon. She is getting the good stuff (Neocate), which is like $60 a can, ouch! Hopefully this will work for Kayleigh because I seriously don't know what else will. Aimee and I are still on edge, but hopefully things will start to turn around soon. She did weigh in last night at an unbelievable increase from the night before. She weighed in at 1158 which is almost 2 pounds 9 ounces. We will check in later tonight to see if that was an error or true 98 gram weight gain. Hopefully it was accurate, so we can get closer to this 2000 gram mark.

So what is going on? I have no idea and it doesn't seem like anyone else does either. The main struggle through this is not that Kayleigh might have a serious problem or not, but just not knowing what that problem is. No one wants to see their child in pain and not knowing what that reason is that is causing them pain. That has got to be worse than Chinese water torture. All we are doing right now is driving ourselves insane by asking, "Could it be this" or "Could it be that." Right now, trusting in God is all we can do and hope that what ever it is, it shows its face quickly so they can fix it.

Please pray that whatever this issue is, it is resolved quickly and Kayleigh can rest peaceful again without pain medicine. I just don't want there to be any more struggles and to journey the rest of the way on an easy down hill slope right out the door. I know it is not the end result, but the journey that matters. But come on, how much more are we suppose to learn from this? (Sorry I am trying to be funny without flipping out)

Thank you all for your support through these tough times. I could use a hug from you all, but Aimee would really think I lost it if she caught be embracing my computer.

My prayers are with your family. Try to stay strong, I can't imagine being where you are, But I pray that if I ever were I would do as good as the both of you have.

I am sorry the past few days have been crazy. Sending my prayers (and a hug) your way. Hopefully tomorrow will bring good news.

I don't know what to say! I wish I could say something to help out Kayleigh and you two!! I just know how it feels where you want to take all the pain for your babies!! :*(

I pray that what ever is going on, it passes quickly or they find out whats wrong and solve it!! Praying for Health and Weight for Sweet Kayleigh!! I pray for you both (Adam & Aimee)for strength!! Its so hard, I know!! God Bless You ALL!!

I have been following your story for about a week now. I found your blog on Parents.com and i've been addicted every since. My son weighed only 4lbs 13oz and stayed in the NICU for 10 day's. He had a small bleed on the right side of his brain. They say its commom for preemie babies. I feel that with god looking after him he healed the bleed in his brain. God works in mysterious way's and he's going to get you guy's through the up's and down's. My thought and prayer's are with you guy's every single day. Kayleigh is absolutely beautiful and a miracle. You guess are very blessed. "Throw back the shoulder's, let the heart sing, let the eye's flash, let the mind be lifted up, look upward and say to yourself...NOTHING is impossible" God bless and good night.

I know how hard it is to watch your lil one through the plastic glass wishing you could make everything better for them. And it's even harder when you have no clue how to fix the problem. I pray that she feels much better soon and that they figure out the source of her bother real soon.

As far as her weight goes....for not being feed as much as she has I would say she's doing good. Didn't she have severe IUGR??? Carly had severe IUGR and they told me that babies who suffer from that are slow growers and usually short in stature. Well anyways what I'm trying to get at is that Kayleigh weighed how much....a lil over 500grams right? Well I went back to compare and I know all babies are different and grow differently BUT...Carly was born weighing 380grams (13 ounces) and at 2 months old (well 2 days shy) she weighed 2 pounds 4.5 ounces and NEVER missed over 24 hours worth of feeds in total. She always did very well with her feeds. So with as much feeds as Kayleighs missed I would say her growth was good for 2 months old and suffering from IUGR. Well those are just my toughts.

My prayers are with you all. Goodnight and Good Bless.

I know she's still little, but Kayleigh has grown so much since she was born! She's fought and won so many battles already. You and Amy are doing an amazing job and I know you love her, as my 3 year old says, "like 80 African elephants!"

You are walking down a very hard road but I thank God that he is with you and giving you strength to endure. Remember that God loves Kayleigh and made her in his image. He has a plan for her life.

I am also hooked on your story after finding it on parenting.com. I will do my best from here, you are in my prayers! Much love to Kayleigh, shes a soldier!

My goodness, you guys are strong. Keep your incredible strength and I'm praying that your questions are soon answered and you can get your little girl growing and growing!!

Adam,
You and Amy and your beautiful family are in my prayers. My husband checks in on Kayleigh almost everyday. We love watching the video of her taking that first bottle. That look of surprise on her face was just precious. We giggle at some of the pictures and the expressions on her face. She just brings so much joy to our lives. Hang on to those moments.

Thank you for all that you are doing to share your ups and downs with the world. We hang on every moment.

~Jennifer (from MD) been with you all from BBC.

I read your blog every day. I found it on the babycenter board for pregnancy complications. I pray for your little Kayleigh every day.

While I can not say I have been exactly where you are my son was only 4 weeks early but he stopped breathing when he was born. We spent a week in the NICU and worried for years if it would effect him long term. He is now 3 1/2 and happy and healthy.

I will continue to pray for Kayleigh every day. She is a beautiful and strong little girl. Thank you for sharing your gift with everyone through this blog.

My third daughter was born at full-term and spent the first 8 weeks of her life screaming. Truly. We put her on EleCare (same thing as NeoCate - different manufacturer) and 24 hours later, she smiled for the first time. But, here's the good news.... if the NeoCate works for her, you can purchase directly from the manufacturer and have it delivered to your home. My little one is now 13 months old and still on EleCare - it runs us $189 for a case of 6 cans delivered. When I tried to purchase it through a pharmacy, each can was $50. I think you'll find the same thing with the NeoCate.

Of course, your insurance might cover it. Ours didn't, but some do. Worth making a call if you find that she is feeling better on it.

I pray that the doctors are able to determine what is causing her discomfort quickly and that your beautiful little one is feeling better soon.

I read your post. It's so sad and heart breaking.

It's sad seeing children who are suffering.

You are in my prayers. We all do need prayers.