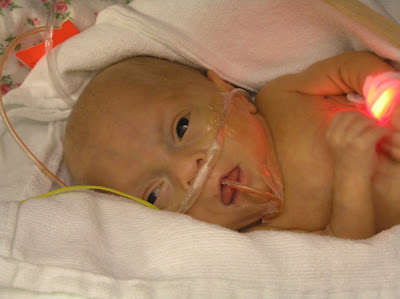 Right before her meltdown. 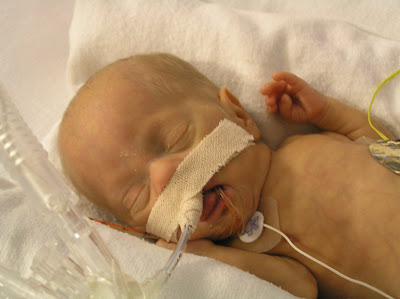 After her meltdown.
You don't want to see what she looked like during her meltdown.
Today was a very stressful day as Kayleigh was acting up like never before. This morning, the doctors performed the Lower GI Dye test and soon after, the opthamologist came in to do an eye exam. So needless to say, Kayleigh was put through two stressful situations that caused her to be so irritated that it stressed Aimee and I out to the hilt.
The Lower GI test came back normal with no obstructions, so that is great news. She had some major blowouts today and from looking at it, I am almost positive that was the reason she was having a bad day. They are going to start her feeds again tomorrow, so I am excited to see if we have progress this time around. The eye exam went great and the doctor said her eye are responding wonderfully. This is really great news except we were not able to enjoy it because of how irritated it made Kayleigh.
When we showed up, she was so uncomfortable and she was breathing as fast as can be. She was desatting every now and then, but just seemed nothing like her normal self. After about fifteen minutes, her desats started to get worse and she wasn't recovering from them. She would stick around the 40-50's with her saturation and there were no signs of getting any better. Sometimes is would drop in to the 20's and that is when things started to get really scary. Aimee tried to hold her for a second and all of a sudden, Kayleigh went apnic but didn't catch her breath to start breathing again. It was a good 25 seconds before Kayleigh started breathing again. Our nurse had started to bag her to see if that would help to bring her sats back up and she gave her some medicine to calm her down. Neither were working and we were just flipping out.
After about 45 minutes through this heart wrenching situation, the doctor advised the nurse to put her on the bubble cpap, but that didn't help either. It was on for about 5 minutes before we were told to leave the room as they intubated her and put her on the vent. When we got back in, Kayleigh had worn herself out so bad that she was sleeping and the vent was breathing for her. We were so relieved to see her calm and satting good again, but I hope she is relaxed again when she wakes up. We both just held her hand and watched her sleep peacefully for a while before we went home. We are both so stressed out right now! It was just a very crazy day. It just breaks my heart that there was nothing we could do to calm her down. I am so thankful or all the doctors and nurses who helped out today. They did a great job.
Pray that Kayleigh will have a much better day tomorrow and that she will tolerate her feeds well. Also, please give thanks for such wonderful and knowledgeable doctors and nurses.
God Bless,

One time, Lisa (Mommy) got to see Brinson turn blue during an episode and she clamped down. It was a good 20-30 seconds before she was back to normal. Very scary....we can totally relate.

Hang in there guys, we are at home now and you will get there too.

Our thoughts and prayers are reaching out to you guys.

oh man! Just one of those procedures would wear a preemie out. I wish they could of put the eye exam off till tomorrow. Just one thing at a time. They get overstimulated so easily and that was a lot for anyone to go through! Sometimes I felt, at least toward the end of Anthony's stay in the NICU like they were cramming a ton of new things for him to do at once and sometimes I wanted to yell at them to slow down, that he needed to do 1 thing at a time at first. At least thats how I felt about it all.

Give that little girl a kiss for me and Anthony. Soon she will be home in your arms!

Bless her heart! Poor girl had a rough day. I'm glad to hear she had a good poop though and they can restart her feeds again tomorrow. That's good. Praying for her to get plenty of rest so she can be back to her normal Kayleigh self tomorrow!

Hang in there! This is one of ups and downs of the roller coaster ride of a preemie. I know it is hard to watch, but once they are stressed out like that, it may take a day or so to return to their "normal" self. Keeping you in my thoughts and prayers.

P.S. came upon your blog through another preemie blog in KS.

I am sure they are already feeding Kayleigh hypoallergic formula, but just felt like writing here. Food for thought only! May be that will reduce her gases.

My son was full term but yet to avoid gas problems we heated up my stored breast milk to luke warm temp.. and fed him. With warm milk the earlier digetsed food used to get moved within the tract.

Since Kayleigh is too small I am not sure if you can burp her very well after every feed.

Divine has taken care of this baby so far and will take care of her in future also.

Kayleigh is always in my thoughts.

You truely do have a Gift from God. I can say from experince hang in there! I have an 11 year old daughter and at birth she wieghed a whopping 1 pound 8 ounces. We had those melt down days. I soon realized the melt downs were our own not Kayla's. She was such a fighter. From over coming the the needle sticks and a bout with pre-nec. We made it thru and after 33 days in the hospitol we got to go home at 4 lbs 3 ozs. Now she is a happy beautiful preteen with no memory of what I so painfully put her thru. So keep your chins up, there are normal days ahead it's just hard to picture them right now. Oh and get as much rest as you can :) the nurses don't get to go home with you (I wished for one a few nights lol)

Just wanted you to know that I come by just about everyday to see how your little sweetie is doing. I'm happy when she is doing great and get sad as if she is my own child when she isn't. I've been following this blog from day one and have sent many people to go and read it. I look at your DD as an inspiration.

I am currently pregnant again after suffering a loss and your story gives me hope on the days I am feeling down. I am not able to purchase a bracelet yet, but do know that I will purchase a handful very soon.

All my prayers to you and your family.

Can I just say that Kayleigh looks so beautiful! And she is looking so much bigger now. Amazing what a pound can do. Praying that she starts gaining more and more weight so that she can go home. Hoping that when the day comes and you get to bring your sweet little pumpkin home you continue to keep us updated. HOpe they figure out what is causing her to be so upset. Lots of love and prayers.