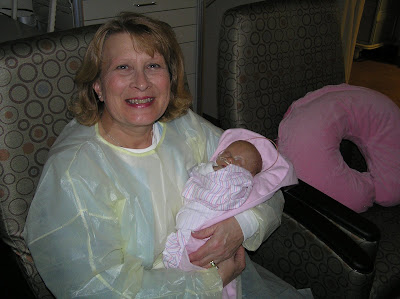 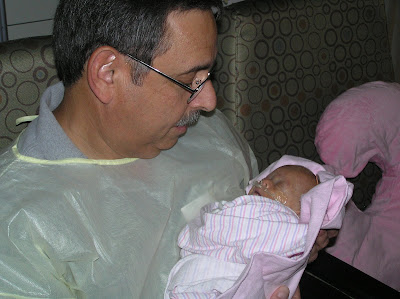 After a long and hard fought battle through the NICU, Kayleigh has gotten to a stable place in our eyes where we will allow Kayleigh's grandparents to hold her. You are probably wondering why it has taken this long and probably saying "It's about time." Well, for most of you who have not traveled the NICU journey before, the biggest fear when it comes to other people touching Kayleigh is that if she gets sick, you don't want anyone taking blame or pointing fingers. I would be devastated if someone in my family were to hold Kayleigh and something go wrong, and them blame themselves. Whether or not they had something to do with it, we didn't want to take that chance. It might sound cruel in a way, but until you are in this situation, you might not ever understand.

Anyways, it is long overdue and they were so excited to finally get to hold her. Kayleigh is doing great today. She is up to 32 mls on her feeds and tolerating every last bit of it. Every time I have to smell one of her "beyond stanky" diapers, I am quickly reminded of the troubles she once had with her bowels, and I proudly change with a smile on my face.

Aimee got Kayleigh to latch on again with the nipple guard and Kayleigh stayed on for at least 20 minutes while they tube fed her her normal feeds. That way she got the amount she needed while working on her feeding skills. It was cute when she wore herself out and fell asleep right there with Aimee. Normally, she would struggle to fall asleep because she always seems like she is going to miss out on something. She sleeps with one eye open and at any slight movement, she perks up and looks around. Today, she was smiling for everyone and just seemed to be in an very happy mood.

We are at a crossroads though. Kayleigh is not growing as much as the doctors would like, even being on full feeds. We have alternated her bottle feeds with tube feeds so we can save the amount of calories burned from bottle feeding/breast feeding all the time. We are thinking of cutting back more, so we can save those calories to grow. The doctors are even thinking about fortifying the breast milk again, but I am so weary of going down that road again. Whether we cut back on her bottle/breast feeding or we keep things the way they are and she grows slower, we run in to a situation where it may take a lot longer to get her to come home. If we feed her fortifier and she blows up again, we run in to a bigger issue where she doesn't feed at all and we have to go back on TPN, which would be a big mess. It is a tough decision and a crazy balancing act, but hopefully we will pick the best road to travel. She only grew 7 grams from last night, which isn't too exciting.

Some had asked about the Molar Pregnancy issue and we have not found out the results of that yet. They said it could take up to 6 weeks and it has only been 3 or 4. Hopefully we will find something out soon, so we can get some answers.

I wish everyone a great weekend and please pray that the doctors make the best informed decision on which road to take with this feeding/growth issue. I am ready to bring my baby home!!! ha:)

Thanks and God Bless,

Can they fortify the breastmilk with Neocate? That is supposed to be the best of the best baby formulas for babies with acid reflux. It is the easiest to digest. My daughter tried it and she was still vomiting, so I put her on pure breast milk, and while she is (barely) gaining, we now are trying duocal (she didn't tolerate polycose). These products are extra calories to add to the formula/breast milk. I don't think they have any nutritional value. My daughter is also 13 months (10 months adjusted).

About a month after Kayleigh was born, we tried breast milk and it worked like a charm. The only thing that held us back was her blood sugar levels were too low, so they switched her over to fortifier. We have tried several fortifiers, Neocate being one of them, and nohing has helped. If you read back over the past two months, not digesting her feeds/fortifiers have been a huge issue with Kayleigh. The fortifier causes her belly to low up and she doesn't poop for weeks at a time, even with glycerin shaves. That is what led them to do an exploratory surgery of her bowels just a couple weeks ago.

Very good question and I am so happy a fortifier worked for your daughter, but little miss Kayleigh is a very picky eater :) ha ha!

I am happy that her grandparents got to hold her!! You hit it EXACTLY on the point!! The fright of her getting sick is so devistating! We actually stopped visitation from our family members because my baby was sick! When he got better then we agreed to allow them again (No touching though!!)! When Kayleigh gets out of the hospital, you will even have scares of people breathing on her or germs as they touch her! We all go through that! Adam and Aimee I would stick with the new preemie board on BBC! When she gets out of the hospial there are going to be sooo many other questions that will come to your mind's!!

Aimee I am not the best person to know but I am just wondering if this would work! Would latching her on the breast be getting her to tierd? Plus she trys for the bottle to right? That might be whats making her so exhausted and not gaining weight!! Would they let you take away bottle or breast (contimue breast milk though) for now?

With my son I tried a couple of times trying for him to latch on to the breast. When he got the suck of the bottle down good I started to switch my breast in there. And it worked for him! I know....every baby is different! Also they gave my son a fortifier of 24 cal with my breast milk! Worked good for him also!!

I hope what ever you choose it will work like a charm for sweet Kayleigh!! She is so adorable!! God Bless!!

hello!
im more of a lurker and just want to tell you that your little girl is amazing! i also had a preemie last october and in the hospital i had to make the decision to stop breastfeeding but still give aj breast milk in a bottle because he was to burning to many calories and wasn't taking the full amount and then they would have to put the rest in the ng tube. he pretty much always took the full amount from the bottle. so to bring him home sooner i stopped the breastfeeding and would try it up again when i got home. long story short aj was never really strong enough to breastfeed so the pump became my new bestfriend. i wish you the best with your decision.
angie

I have been following little Kayleigh's story since around the time she was born. I have had similar issues and your blog has really helped me prepare for our little girl. I had a subchorionic hemmorage at 6 weeks and was told I was miscarying. At 8 weeks, I found out that our baby was a twin, but had a healthy blood test. At 13 weeks, I was told that her downs syndrome test came back postive with a 10% chance for DS. Her U/S came back normal and we opted to not have an amnio. The one protien level that was off puts the baby at risk for preterm labor and growth restriction. Everything was fine until this week when I had to have an emergency c-section due to a placental abruption. Addisyn was born on Oct 7 weighing 3 lbs 3.7 oz. Following your story has really helped me with knowing what can go on with a premature baby. So far she is doing very well and I hope she continues to. Good luck with your little one.

Possibly try to see if you can use Neosure by Similac, Parker is on that and he's growing like a weed and that's what they fortified breast milk with and it seemed to work...they also mixed it to 27 calories...instead of what they do on the can. I hope you find something that works for you guys!

One option is to try to increase the calorie content of the breastmilk you give Kayleigh. To do this, when you cool milk you have pumped in the refrigerator, separate the thick creamy hind milk from the thinner, almost clear foremilk. Or you can pump into one bottle for 5 minutes and then another for as long as you continue to pump. The second bottle will be the hind milk. The hind milk has more calories. This might mean more pumping, but it's one way to increase calories without trying something other than breastmilk.

Does your nicu have one of these? http://www.selfexpressions.com/mecrpl.html I read somewhere that breastmilk can be concentrated to 30 calories per ounce with this, which is better than a lot of the fortifiers?

I would also try to limit the distractions when Kayleigh is eating as much as possible. Can you make the room dark and quiet? Turn down monitors and help her focus her energy on eating?

I'd continue trying to breastfeed (with or without the shield) at least once a day. There's so much more to it than nutrition!

Thank you for the daily effort of compiling this blog. It is so beautiful and to be in touch with the family is truely wonderful. Your little Kayleigh is a true fighter, must be the polock in her. I am so glad that she has finally been able to feel the physical love touch of Patti and Gary also. We keep you all in our prayers. Judi and Uncle John

I am utterly amazed by this story. You two are the strongest parents I have ever seen! I have read almost every post Just tonight, it's like a book I can't put down! I've cried at her cries on the videos, and her pictures of how tiny! You are the most wonderful parents EVER! You have amazing strength and per ser veer ence (I can't spell the word for the life of me). My little twin daughter Natalie Grace was born at 37 weeks weighing in at 3lbs 10 oz. She had IUGR. Her brother Nikolai Ethan was 5lbs 12.4 oz. I realize how lucky I am to have gotten to take her home with me right after my 4 day stay for my c-section. And it makes me all the more greatful for every moment I have with my twins. I don't know if I could of made it through all of what you've been through without going insane. My babes are now 7 months old and weigh 14lbs and 18 lbs. With Faith, Hope , Love and prayers! I wish the best for you. I'll keep on reading!

I am so happy everything's going well!