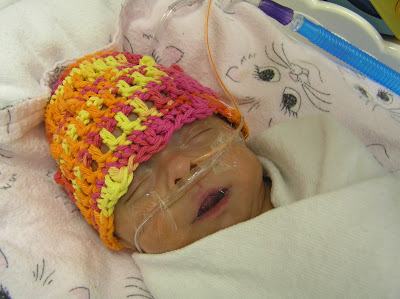 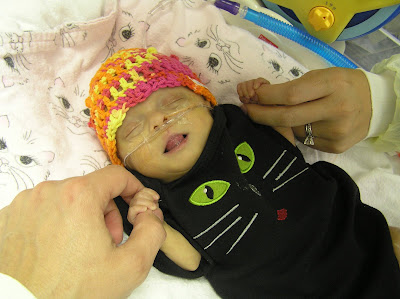 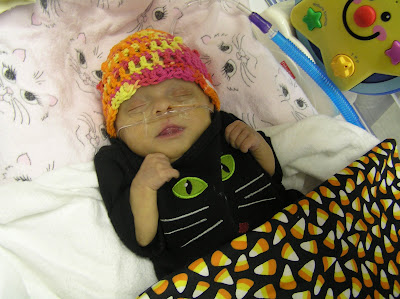 Doesn't she just look adorable in her 1st halloween costume. Thanks to Jake, (my grappling/sparring partner) and Alicia Kozlowski for the outfit. They just had a baby girl named Sloan Piper, who was actually supposed to be two weeks older than Kayleigh. It is still weird that Kayleigh is 3 months older, but about 1/3 of Sloan's size now. Aimee and I had such a blast being able to put the outfit on her for some photos. I don't think we were supposed to dress her since Kayleigh has a PVC line still in her leg, but what kid doesn't get to dress up for Halloween? ha-ha!
Kayleigh is continuing to make great progress. The final check off from the list for a stable prognosis was the CT scan and we are happy to say that it came back normal today. The cause of her high blood pressure was actually due to the kidney's giving off a secretion called renin due to a possible blood clot that formed somewhere in her body. Thank goodness it dissolved and the blood pressure came down to normal, but the doctor's fear was that the clot was in Kayleigh's brain. That would not have been good. It is a great relief to know it didn't cause any serious damage and it fixed itself. I told the doctor today that the heprin that almost killed Kayleigh in the cath lab was probably the same thing that saved her life with this blood clot.
Kayleigh has gone up on her feeds to 30 mls and is having only a tiny bit of aspirates. She is growing!!! She weighed in tonight at 1870 grams which is 4 pounds - 1.9 ounce. Thirty grams a day is very good growth right now for her, so let's pray she keeps that up. Tonight while Aimee and I were tricker-treating with Brandon and Allyson. A friend we met has a little girl who was born 27 weeks was 2 lbs. She is now 8 years old and half the size of Allyson who is 9. All I could think about was how precious Kayleigh is going to be when she is so much smaller than everyone else. She can stay tiny for ever, which makes it that much easier to cuddle with me :)
Even though Kayleigh is perfectly stable, the heart surgeon is still looking at Monday or Tuesday for the surgery. As the days go on, I am getting more and more nervous, but still confident as can be that the outcome will be an amazing success. I am so happy that Kayleigh will be going in to this procedure at 100% so she can be strong and fight hard. We were told not to wear ourselves out by staying for long hours this next week because Kayleigh needs us to be strong for her while we are there. So, I think we may beg and plead for an available sleep in room if it is not being used. We just don't want to be away from her for a second if we don't have to. She is not going to fight this recovery alone and we are going to pray and send positive thoughts every step of the way. It is going to be a very emotional week for all of us (you included), so being that I will have a lot of time to do things, I should be able to update the blog more often with any news. I will send some photos, but I don't expect them to change very often since Kayleigh will be sleeping the whole week. I will try to be creative though :)
Thank you all so much for your prayers. Kayleigh has recovered 100% because everyone is reaching out to God for her. It is amazing how quickly things turned around when you all posted your thoughts and prayers. That is a true testiment of the power of prayer. If you don't believe in God's power after seeing it first hand through Kayleigh, I don't know how else to prove it to you.
Keep the prayers coming and I hope everyone had a wonderful and safe halloween.
God Bless,
The Freemans :)

How sweet is she?!?! I could sit and rock her for hours. I sure hope yall can get a sleep in room so that you can comfort her after her surgery. She needs her mommy and daddy. I'm praying for yall.
Nikki Conway

Congrats on your BIG 4 pounder there! And that is soooo scary about the blood clot!! But like everyone says, everything happens for a reason and it sounds like that procedure happened at just the right time! And it just might of saved her!

Good luck next week! I know Kayleigh is going to do just great!

it's AMAZING the look she gets on her face when you touch her, she loves it - it's so astounding to watch, her reaction is so deliberate, she loves you so much. good luck - he is a gift

May God continue to bless you Kayleigh!!

YAY!!! so glad she is doing so well. I am praying that her surgery goes well. She is a FIGHTER!!! Lil Miss Fights a lot! That should be her name!!

What a cute first Halloween picture!!! We are praying extra hard for you this weekend Kayleigh. Keep fighting girl!!!

Hi! I am friends of Morgan Kate's parents and I just wanted to send you a quick message and tell you that your courage just overwhelms me! I am so impressed with your positive outlook. I have been keeping up with y'all since I saw your link on MK's page. You and your family have been in my prayers and I will keep the prayers flowing for your family.

Your prayerful friend from
Irmo, SC :)

My 10 year old son wanted you to know he has named your Halloween video of Kayleigh. :lol:

Its called: "The Squeak". When asked why, he told me because he little sounds are like cute squeaks.

I love the video, she looks so strong and is that a little bit of chubbiness I see under her chin ! Such a gorgeous little girl ! Her strength amazes me, she must take after her parents !

She is so beautiful! I hope she continues to have such excellent progress.

I'd love to make Kayleigh a hat! If I can, let know an address and an approximate head circ.