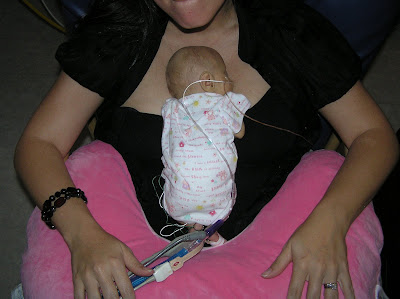 Today is our second year anniversary. Woo Hoo! We decided to treat ourselves to one of our favorite restaurants, Nakatos. It is a Japanese Steak House where the chefs cook right at table side, flipping their knives with flames shooting up everywhere. It is a lot of fun and we enjoy the food so much that we hurt so bad afterwards. I think Aimee has been to the restroom four times and we have only been home for about 45 minutes. haha :)
Kayleigh is doing awesome! When I told you that progressive care was in sight, I didn't think it was so close that tomorrow might be the day. YES!!! Tomorrow! We spoke with our doctor and he wants to keep Kayleigh in the NICU because just last week she was having so many issues and even though she is doing so well now, he wants to keep a close eye on her. We took a tour of the progressive unit and on our way back through the NICU, we saw the doctor and told him how awesome it is over there, and he said that maybe tomorrow we will send you over. How awesome is that!!!!!
Just to give you an idea, the progressive unit is just down the hall, but it is a completely different world. I don't know if I described to you what the NICU looks like, but I will do my best. When you walk through the hard, worn out, stained carpet floors, you will make your way down a long narrow pale grey hallway to Kayleigh's nursery. The automatic doors open up with a loud rustic sound as if a garbage truck was packing it's trash to make room for more. When you enter in to the south nursery, you are surrounded by beeping and dinging from eight other preemies within visable site from each other. Making your way through the crowded 16x20 room packed with at least three nurses and four other children, Kayleigh is situated in her little corner where you can luckily fit two chairs side by side to spend some quality time with her. There is one little window that faces a cobble stone roof loaded with air conditioners that seem to never catch any sunlight no matter what time of day. With not much sunlight and enough oxygen flowing at once, you are bound to get the best sleep of your life. It is hard to stay awake and spend the time you want with your precious child.
Now, when you walk in to progressive, two silent automatic doors flow open to shiny, waxed hardwood floors with windows in every direction you turn. You are thrown instantly in to another level of luxury that you can't help but drop your jaw to the floor. We made our way in to where Kayleigh will be residing and there were comfortable leather chairs and curtains to close yourself off for privacy. It was as if Kayleigh will have her own penthouse suite compared to the dorm room she is in now. Each room has their own large window that looks out to nothing but green trees and passing traffic, which is more than enough to look at while she is passed out sleeping on my chest. When you look around, there are other rooms equipped with silent monitors, lacking the chimes because most of the babies are one step from heading out the door to their homes. The space was amazing as if our whole section was a completely separate wing in the hospital. It spoke class in there and even though Kayleigh might need monitoring, we would much rather her get better rest in a quiet and peaceful location away from all the noise in the NICU.
Please pray that Kayleigh will go to progressive and she will stay there until it is time to come home. She certainly passes the requirements to be there now, so let's just keep it that way. She does have to get the cath, but the cardiologist feels that we can wait 2-3 weeks before they put it in since she is doing so well right now. They want her to grow more and be able to handle the procedure very well, so we don't run in to the risk of what happened last week.
Last but certainly not least, I received an email from several people today about a petition that is going around for The March of Dimes. The petition is for prematurity awareness so the government can give more attention to research, health coverage, professional guidelines and to support maternal/infant health. I am never a demanding person, but I demand you to sign the petition. Click here to sign the petition: Petition for Preemies
Thank you all so very much and God Bless,
The Freemans :)

Congrats on all the great news! Can you post that link again for the petition it did not come up!!

what wonderful news!! everyday our God amazes me more and more. I can't wait for the post when Kayleigh comes home.

Adam-how much did Kayleigh weigh tonight? Was Aimee able to practice breastfeeding tonight?

god bless all of you!!

SarahJ. (and her family, Christopher, Helaina and Ava)

Kayleigh weighed in at 1563 grams which is a little less than the night before. Aimee tried to breast feed for about ten minutes, but Kayleigh was getting so frustrated. Aimee was not flowing like usual today, so it made it hard for Kayleigh (who doesn't suck real hard) to get anything out of it.

How exciting!! The NPCN is quite and they are super sweet nurses over there. Amber,Clarissa,Melanie and Stephanie are AWSOME!!! I just knew she would be going before too long! She'll be 4lbs soon too!!! Will she have to go to the cath lab to have her procedure done?

Good questions. I am not sure if we will have to go to the cath lab or not. They haven't filled us in about that. I will check tomorrow.

That is such great news!!!!! Will they be putting her in an open crib soon too?

I'm so glad that Kayleigh is doing so well. Definate prayers that she gets upgraded to the penthouse suite! :) I would love to sign that petition for you, but I'm Canadian and since it's for the US I can't. This week has been great so far ... my morning checkups on Kayleigh as left me smiling all day!
God Bless,
Cherilynn :)

I am so excited for you all. I hope the big move happens soon and that she continues to thrive in her new surroundings. Also, I would still like to order a wrist band. I got sidetracked with the hurricane and don't know if you are finished ordering them. Thanks a million for sharing your gift with the world. She is truly a miracle.

Congratulations on Kayleigh's progress!!! I had to laugh at this post and your earlier post about being sleepy in the NICU. My husband and I had the same conversation when our girls were there! Something about being around peaceful sleeping babies. You just wait until you hit those comfortable leather chairs!!

wow, GREAT news! I can't believe how much progress K has made over the last week! I hear you about the HUGENESS of moving out of the nicu...no one gets it entirely, if they haven't lived through it.

so happy for all of you!

Aimee & Adam ~
I don't know where you get your strenght but you two are amazing. I have been following your beautiful daughter's story since I entered my own son into the baby contest and came across Kayleigh's picture. I don't have internet at home so I can't wait to get to work to check and see how she is doing. I wish you guys all the best of luck. I keep Kayleigh in my prayers.

Yeah Kayleigh! You are doing so well. Adam and Aimee I'm so glad that you had a good anniversary, I love Japanese steakhouses they're so fun! I'm praying for progressive care, it sounds less hectic, and maybe Kayleigh can spend all of that quiet time growing and getting home.

Hey ya'll, I just came across your page while and I understand completely were you are! I am going through it right now. It is so hard. I just wanted to say that Kayleigh's in our prayers tonight along with our little boy Carter. God be with you, especially you Aimee. I pray Gods hand over you and your broken heart.
Crystal Riezinger
www.carterdaniel.shutterfly.com

Someone asked about the basinett and I am going to answer that question in tonight's post, so keep an eye out for that.

Beth, I have four bracelets left from the previous order and we will certainly get more if we need to. Thank you for purchasing one :)