We are not satisfied yet, but it looks as if Kayleigh might be making a turn in the right direction when it comes to her feeding. Normally she has only been taking a few ml's here and there through a bottle, but yesterday she took 17 mls at one feeding and 22 mls at another. Hopefully, she is starting to get back on track!
Her weight came back up again as she weighed in a 4 lbs - 4.3 oz. She was still a little cranky yesterday, but only showed signs of irritability when it was loud in there from other bed alarms going off. I guess more and more she is starting to act like a normal 5 month old, now that nothing else is physically wrong with her. We hope to see some more improvements today! 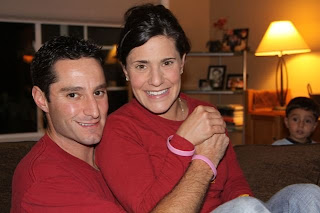 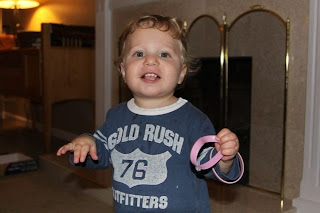 This photo is my cousin Matt and Rachel with their two little boys, Charlie and Joshua. Joshua is in that stage of "no pictures of me," so they had to sort 0f sneak one in with him standing in the background. They have been such a great support system to our family while we have been going through this journey. By the work of God, Kayleigh has done some amazing things as it has brought family and friends closer than they were before. I know that Aimee and I both talk with several people we either didn't talk to as much growing up or we lost touch with completely. We have started to grow those relationships back or into something nice and we are so thankful for that. 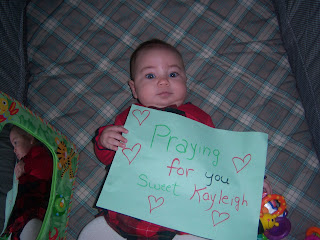 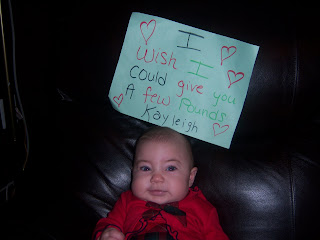 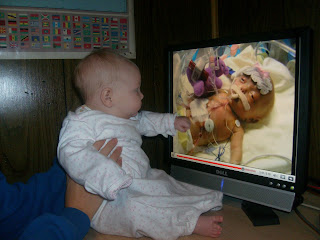 Here are some other wonderful photos of Kayleigh's friends. The friends we have met along the way have been great and we couldn't ask for some great photos for Kayleigh's scrapbook. We know for sure she is going to love every bit of this when she grows up. Aimee and I have always been one's to cherish every little photo or memory we have had when we were children. Just looking back on old photos is a blast in itself. Some of the things we wore back then and those crazy hair dues. Kayleigh will have her scrap book and this blog to share with her children one day, and her children will be amazed at how awesome she really is.
Thank you & God Bless,
The Freemans :)

Way to go Kayleigh! Keep going little one. Since you started eating like your old self again the other big issue that we have to pray for is your pressures, but those will go down as well. Keep restinga nd growing precious angel.

Good job little one with eating more! It seems she instinctively knew what a person does around the holidays -EAT!!!
Still praying and praising God for your little miracle and her sweet spirit.

I agree...slow and steady is great!! Now just prayers like everyone else that her pressures continue to drop...way to go Kayleigh!!

Many prayers that Kayleigh is getting better!!!!!

Awwwww, I love the little photo that says "I wish I could give you a few pounds!" How sweet is that. =0)

Yes, Kayleigh is going to LOVE her scrapbook and blog someday. I can't wait til she's writing in it for us!