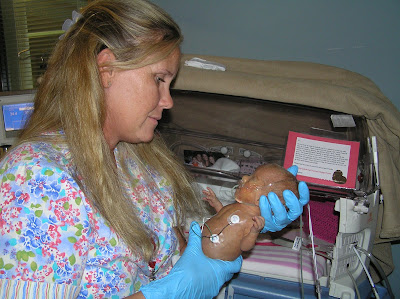 Here is Cynthia, one of our wonderful primary nurses. 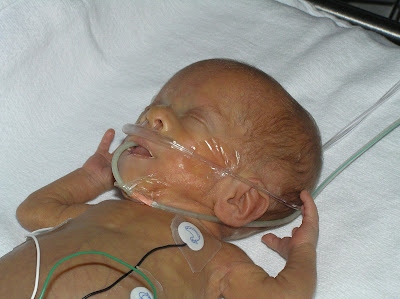 OH MY GOODNESS! When is the drama ever going to stop? Today, Kayleigh's belly started to get bigger and bigger as the day went on. She had an eye exam earlier so we were thinking that she was just grumpy because of that, but it turns out that she hadn't pooped in several days and the x-ray shows some trapped gas again. They decided to give her glycerin to see if they can breakdown what ever is left up in there and get rid of it. About an hour or so after that, Kayleigh finally pooped and it was some thick stuff that just had a hard time getting through her system, probably from the formula. So even though they cut of her feeds seven days ago, she had some stuff left in her that was trapping gas behind it and it slowly bloated her tummy up. Hopefully this was the issue and she will continue to get rid of what's left in there. If things continue to move in the right direction, they will still start her feeds back tomorrow.

Besides all that "crap" (literally), she had her eye exam which came back that Kayleigh has a level one ROP. The doctor said that it is nothing to worry about right now as most preemies have a level one ROP and even level two ROP. The ROP is where the blood vessels in the eye do not grow and reach the point of attachment. If they don't grow, scar tissue will build up really making it hard for the blood vessels to reach their final destination in the growth pattern. This would be considered a level minor, and could possibly correct itself. If it doesn't, it is considered a level 3 major and surgery will be needed to laser the scar tissue, allowing te blood vessels to grow before it is too late and detaching from the eye causing major damage. If the surgery is a success, the eye will still not have peripheral vision. So this is not a road we hope to go down, but like I said before, most preemies have the level one and two before it corrects itself. Let's pray and hope this is the case and it quickly corrects itself.

Even though there was drama today, Kayleigh was so cute when I got to hold her tonight. She seemed to be sleeping peacefully, but I quickly noticed that she was just not digging the lights that were on. It really wasn't even that bright, but when I would cover my hands over her face, she would perk up and start looking around as if she was never sleeping in the first place. So I would go back and forth, moving my hands away and she would close her eyes quickly and just lay as still as can be. Then I would cover it again and her eyes were wide open again. I was really getting a kick out of this. She is going to be so spoiled!!!

I also want to draw attention to all the emails I have been getting lately stating how Kayleigh's story has changed your life. It means the world to me to hear that because it really makes all this time that I put in to posting worth every single minute. Just know that Kayleigh may have touched your life someway and somehow, but God is the true reason for how you found your way to her story. He is Love & He is Life!

Thank you all so much for everything and please keep Kayleigh's tummy and eyes in your prayers as we continue to move towards the day we can bring her home.

I'm glad she's doing well. Anthony got level 2 ROP but it went away on its own and his eyes are fantastic! The eye dr says that his eyes are probably better than mine.

As for the gas in the tummy. I think every preemie i've "met" needs suppositories in the NICU. The protocol in our NICU was if they didn't poop for 1 day then they got a suppository. Even when Anthony came home I had to give him a couple. Its just a normal preemie thing.

I know Kayleigh will over come this as she always does!! She is a fighter!! God Bless you Kayleigh!!!
My prayers are with you sweetie!!!

Yes...Where my son was in the NICU they would put dark blankets over there isolettes. My son was never in an isolete but he was in a warmer for awhile! They would drap over a dark baby blanket on his warmer. I got mad when they did that but they told me preemies are very sensitive to light and touch! I felt soooo sad because I just wanted to cares my baby but I couldn't. They get over it after awhile!!

God Bless you all and stay strong!! Hope you all got my e-mail with the poems!!

I just wanted to say what a beautiful little girl you have!! I pray that everything goes great with her eyes and everything else...I have a little boy who had to have eye surgery in both eyes at 2 weeks because of retina problems (he was full term) so I understand the fear...best wishes!

We did get the poem. It was awesome and so true. I know God will never give us anything we can't handle. I am just so glad that I am married to such a strong and positive wife, because I would have been completely lost without her. This is not an easy road to travel and our communication is key because there are times when us men do need to break down and open up our deepest feelings. I am learning to be a better husband because of Kayleigh. God works in such wonderful ways.

One day at the time is all I can say. FYI my 57 yr old brother was premature. Back then they told Mama to take him off life support, but one young doctor asked if she could try something. Whatever she did worked. Today Sonny works at Chevron refinery in Louisiana sometimes 7 days a week...he is crazy as a bed bug but ain't nothing else wrong with him.

Hi. I've never posted before, but I've been reading your story since before Kaleigh was born. My daughter was born 6/1/07 at 25 weeks 5 days and 1 lb. 11 oz. She got to as low as 1 lb. 8 oz. Reading your story brings back so many memories. She spent 90 days in the NICU and had surgery at 17 days old to close her PDA (valve between the heart and lungs). She also had level 1 ROP, which did resolve on its own. Be prepared for several more eye exams, which are very disturbing to watch. She was finally cleared of the ROP when she was 5 months old. She is doing fantastic today. She weighs around 21 pounds and has almost caught up, developmentally, to her adjusted age. She has never even had a cold yet. I just wanted to give you another success story to think about. I will keep following your story and keep Kaleigh and you in my thoughts.

We all love you Kayleigh keep up your hard work girl.

Much Love and God Bless,
Monica

Just wanted to send you a short note to tell you how much I love reading your story!!! Kayleigh is such a miracle and I just wanted you to know that you have one more person (me) Praying for you guys!!!Wendi

I was just catching-up on your blog. You guys are constantly in our prayers. Sidney does not like the light either, so I always turn them off in the room after the nurse leaves, and then he does the same thing. I actually helps him get stronger because he looks around and moves which help him develop his muscles.

Hey there! You don't know me but I've been following your story since you first posted on preemie parenting over at babycenter. Your story is amazing and I'm so happy to see Kayleigh doing so well. My son was born at 27 weeks almost 5 years ago (gee... Where has the time gone?!) and dealt with many of the usual preemie problems- bradys/apnea, BPD, CLD, grade II brain bleeds, sepsis, PDA surgery, ROP surgery, hernias and I can't remember what else off the top of my head. Anyhow, I wanted to comment on the ROP thing. We dealt with the exams and eventually had stage 3 ROP with the plus disease requiring the laser surgery. He had 1500 "dots" on each eye (which is a lot). I'm pleased to say that he does not wear glasses yet (I say that because I'm blind as a bat so he's bound to need them at some point) and he did retain most of his periferial vision. What he doesn't have, he'll never know the difference- nor will anyone else. So, while the possibility of it is all scary, it- as you know, can turn out to be just another bump in the road. After Ty left the NICU I continued to stay in contact with some of the people there and currently serve on a parents advisory board. I have learned that since the time we were in the unit oxygen setting requirements have changed throughout the country to better help control the onset and severity of ROP. Hopefully you won't have to deal with it but wanted to share our little story to help keep you positive :) BTW- Ty is a normal, happy, healthy 4yo with no evidence of his prematurity other than his pda scar (he calls it his shark bite-ha!). Miracles happen every day! Take care of yourselves and that little one!

I have been following Kayliegh’s story for a while and I was so excited when I read that you guys were baptized at Elevation. Yesterday the services ran really long so by the time we made it to Butler, the cardboard testimonies were about half over. I was so excited to see you guys when you came out there. It is so wonderful to see the miracles God is working in your lives as well as baby Kayliegh.

You don't know me but Hearing your story takes my breath away because I just delivered a preemie in april. He weighed in @ 1 lb 3.6oz but today 4months later, he is a whooping 6lbs 3 oz. My prayers are with you and I just want you to know that things get better even when they seem they are at the worst possible level. Prayers and hope are all part of things we can do. My son had NEC but came through it without surgery very well. These are truly blessings of God and honestly these babies are fighters. As much as we want them here they want to be here to because they are working twice as hard than they would have to in a normal situation. As long as your minds and heart are in the right place, which I can see very much, things will pull through. She will be the best thing that ever happened and when you get her home all the worries and stress will just be but a memory because nothing will fill your heart more than her love. My son has scrotum hernias but will be removed this friday but other than that...he is a normal growing preemie. Even a preemie,he begin taking rice cereal with his milk at 3 months and in usual cases everything is pushed forward by 3-6 months. Trust me she will be home driving you crazy and with each growing day your love will evolve. My prayers are with you!