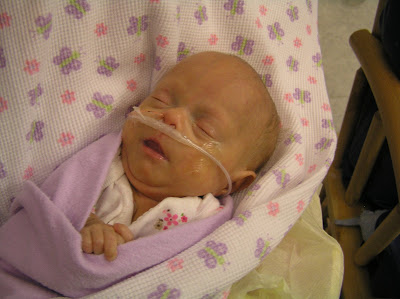 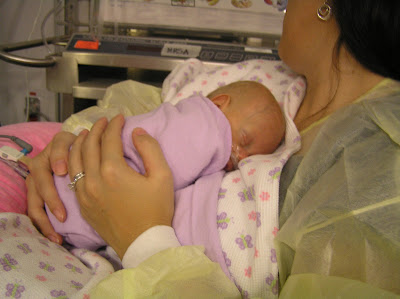 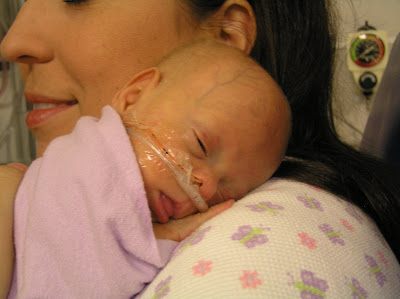 Today was another great day. Kayleigh was dropped from 3 liters of air flow to 2 liters of flow and when we called up tonight, she was satting around 92 on 23% oxygen. They also stopped her antibiotics and she had 4 good poops today. She has increased to 15 mls every three hours, so we should start to see some good weight gain. She weighed in tonight at 1446 grams (3 lbs - 3 oz.) Kayleigh is just moving along nicely.

The doctors said that since Kayleigh is not showing any major issues with her VSD (Hole in her heart), they "might" not have to do surgery when she hits the 2000 grams mark (4 lbs). They said they will hold the surgery off to a later time since doing it at 2000 grams is just the minimum weight she has to be at to have the surgery. So let's pray that we can hold off as long as possible on such a major surgery.

Congratulations to Bobby and Lisa, who are two really good friends of ours. They had their baby girl last night at 11:54. Her name is Isabella Grace, which is such a beautiful name. I am just so happy because Kayleigh will now have two other girls to grow up and cause trouble with that are the same age. The other cutie patootie is Sloan Piper, my fighting/training partner's daughter who was born last month.

One of the Moms that follow Kayleigh's story is asking for everyone to say a pray for her little one, Taylor. Taylor is supposed to be born in a few weeks, but her Mommy's water broke early and they are hoping to prolong the birth as much as possible without any complications.

Kayleigh always looks so cozy when snuggling with her mommy! How sweet!

Praise God for another great day! Keep poopin' Kayleigh--you will be home soon!

Thinking and praying of you and your family daily! Also for Taylor and all the other NICU babies.

I am so happy to hear things are going well for Kayleigh. She looks much more happy and peaceful these days too!

I love the nursery too. Share more pictures when it's done!

I am so happy to hear things are going well for Kayleigh. She looks much more happy and peaceful these days too!

I love the nursery too. Share more pictures when it's done!