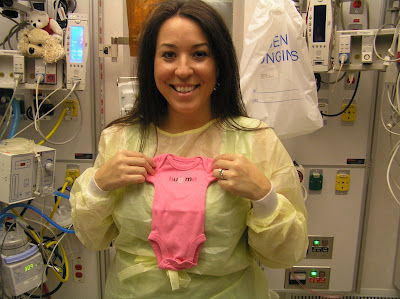 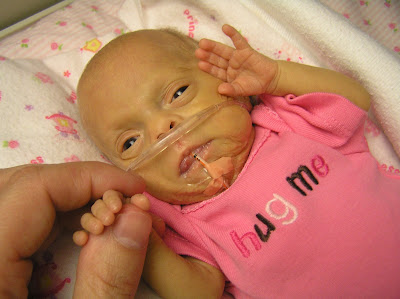 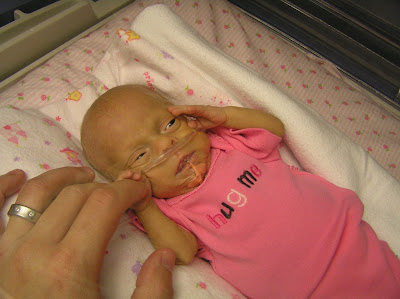 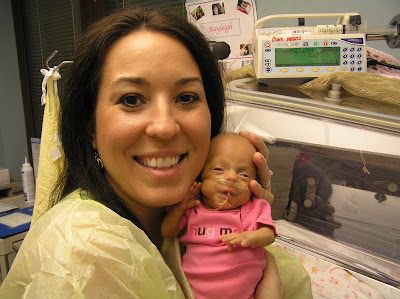 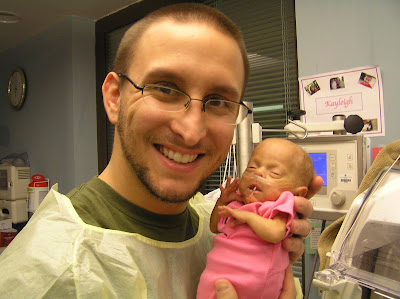 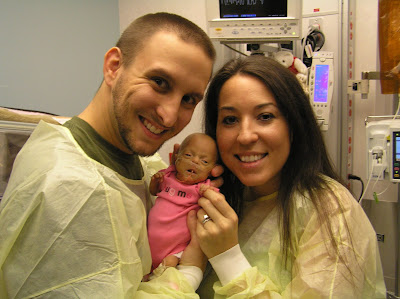 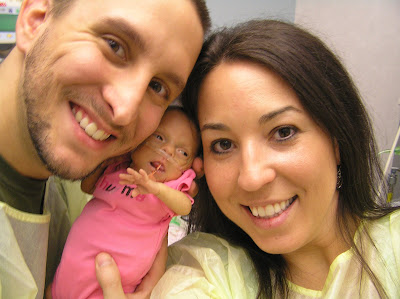 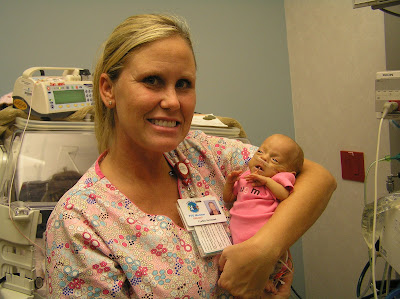 Cynthia, one of the best nurses around!

Today was just an amazing day. Aimee and I had such a wonderful visit with Kayleigh. Since Kayleigh is now becoming a big girl, we brought some of her new outfits and played dress up. She looked so darn cute in her outfit that we just could not get enough of her. I was snapping pictures left and right as it was just a proud moment for me.
Kayleigh came down on her oxygen flow again!!! Woo hoo! She is now at 2 liters of flow. She also came down on her TPN (Triple Mix) IV fluid to the lowest setting of 2. They increased her feeds to 5ml per hour which is the most she has ever had. She hasn't pooped yet, but they are giving her more and more glycerin suppositories as the days go on to help her out. She is just doing amazing in all other fields except the pooping part, but they say if her belly isn't hard, then she will just need a little help trying to pass it out of her system. I would rather her poop, but if she is okay, then I am okay.
The photos we took tonight were great and I wish I could post them all, but these are the best of the bunch. Kayleigh was so awake and alert that it was just a priceless moment. She was not crabby for once and since she is holding her temperature better, we were able to hold her without being wrapped up so much or a beanie on.
Keep praying for poop and tons of growth, but let's all rejoice in her achievements as she is getting closer and closer to making it home.
God Bless,
The Freemans :)

She is just so beautiful. I think pink is her color :0)So happy to hear she is still doing wonderfully. I ll be praying for poop!!!

Awe she just gets cuter and sweeter everyday. I'm so proud of her achievements of the day. She looks so much more cozy in her little clothes. She is gonna cherish these memories that you are putting together for her when she gets older. Kayleigh is blessed to have wonderful parents like the two of you. She looked so cute today I just wanted to squeeze her with a big ol' hug. I can see how it would be hard to stop snapping pictures. Praying for poop. With love, Nikki Conway.

awwwwwwwwwwwwwwww she's just the cutest little thing! I love all the pictures!!!

How wonderful it is to hear she is doing so well. The pictures are fabulous. I am so glad to see her getting so big. I think daddy is going to have his hands full with the boys because she is certainly beautiful, just like mommy. Love and prayers.

Absofreakinlutely Adorable. She is so cute. I LOVE her outfit!!!

OH my goodness is she the cutest baby ever!!!! I check in EVERY day to get my Kaleigh update and it just starts my day out wonderful if you post a good report! I will pray for poop too!!!! Should be soon from the sound of it!
She is BEAUTIFUL! Love her outfit!
Karen, Cincinnati, OH

Love the pictures! She is so beautiful and getting cuter everyday! My son had trouble pooping when he was a newborn, what always helped him was rubbing his tummy and giving him a warm bath. Dont know if that is an option for you guys but it worked for us! I will keep praying that Kayleigh poops! I just love when I come check in on her and she is doing so well, it makes my day :)
Lisa

I posted by 7 month old baby boys picture on parents.com last night. I just ran across your little girls picture. I am not that busy at work today so I started poking around and made it to your blog. I read most of it. Wow . . You and your wife are saints. Your story made me feel so many different emotions. God blessed my husband and I with a perfect pregnancy and delivery. I was so scared leading up to it. Reading you story makes me want to have another baby. Though the battle I just had with my squirmy boy and a dirty diaper may make me think twice. HA HA. I came to work complaining that I smelled like baby poop and here you guys are begging god to give you some poop.

Anyway . . I just wanted to let you know that I read your story down here in New Orleans. I just passed it on to people in my office. My husband and I work for NewOrleans.com. I am a web designer and my husband is the music editor. Like I said we have Luke. He is 7.5 months and his picture is attached. Aren’t babies the best!!!

Your family is in our prayers,

She is absolutely beautiful. I am soo happy and excited she doing this good. It's to imagine how tiny she is, and those pictures make it all set in. Congrats on far she has come. I look forward on seeing more pictures.

Congratulations on Kayleigh's progress. I've been following her story since before she was born on babycenter and I am amazed at what a miracle you have. I am a mom to a 26 weeker so I know a lot of your frustrations and joys. May God bless you all on this incredible journey!
josephsmom26
Babycenter

Kayleigh just looks GORGEOUS! Daddy and Mommy, I think that you are just going to have to lock her away....I'm still doing a poop dance....I love all of the pictures you all post...

hello i am jen18 from the sept board on BBC, i had my daughter at 27 weeks and i have been keeping up on ur story, kayleigh looks AWESOME!!! and i think i see a smile in the pic u posted with Amy holding her up by her face :)

Wow, reading through your story took me from a tearful to a completely sobbing state. What an amazing little girl you have. Since becoming a mother in May (to Kylie...similar to Kayleigh!), I can only imagine the incredible highs and lows you have felt. What an adventure you have had. God bless.